When Karelle Steiner offered to set Christopher Golda up with one of her friends, little did she know she’d end up marrying the man she’d just met. Chris, who had flown into Toronto from his adopted town of San Francisco, had joined a friend for drinks at Bar Raval when he met Karelle, who had come along with his friend. After a fun evening over Negronis, the pair exchanged numbers, and Karelle promised to start matchmaking. Chris, on the other hand, only had eyes for the brunette beauty he'd just met. 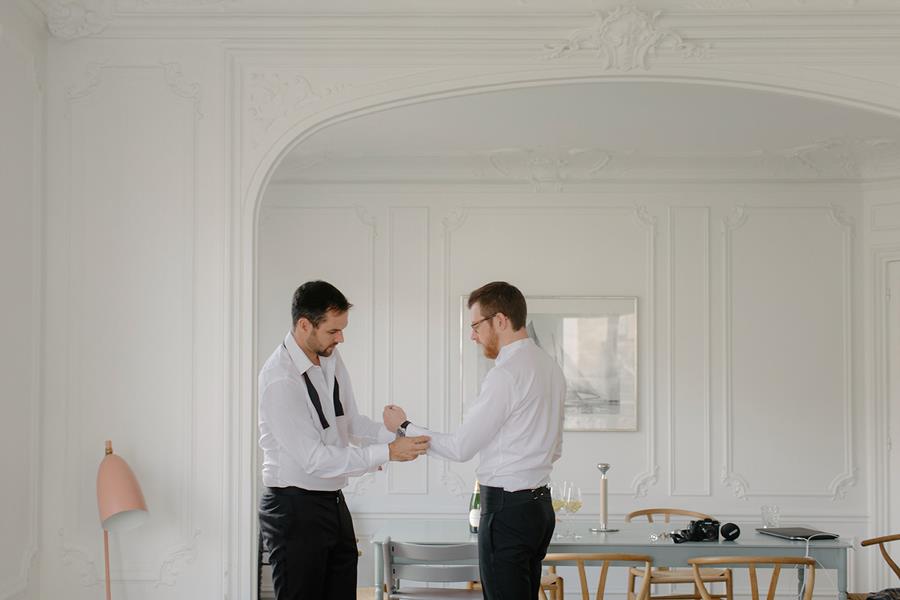 Above:  Getting ready - Chris wore a tuxedo by Dior. Below: Karelle is surrounded with love; the private residence where the pair were married is located in Paris' 8th Arrondissement.

Chris pursued Karelle immediately, and after some hesitation around dating someone long-distance, she eventually agreed to dinner. Chris, an entrepreneur and investor in Silicon Valley,  flew back a month later to woo Karelle. After numerous texts and Facetime calls prior to their first date, nerves were running high. 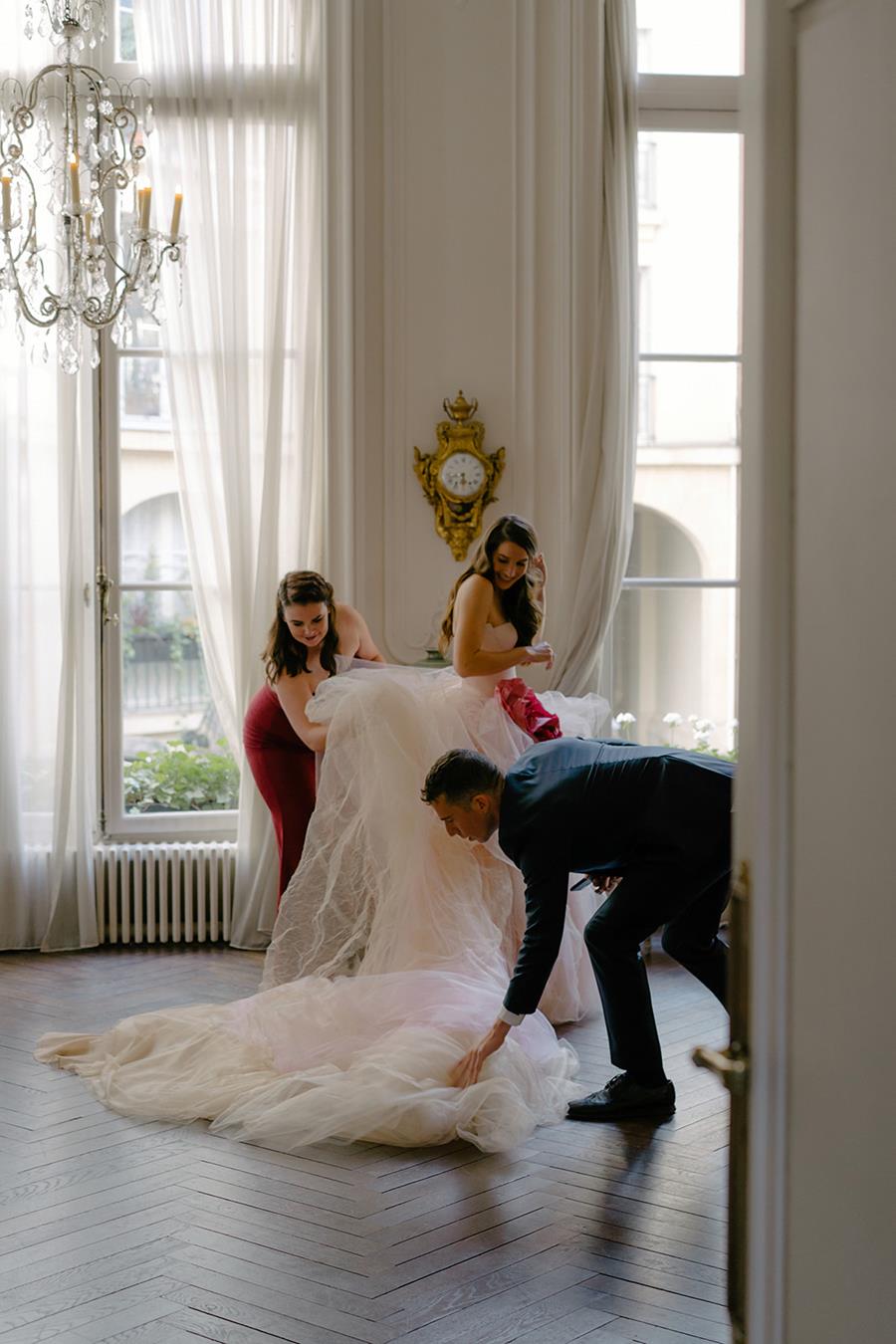 Above: Karelle never wanted a traditional wedding dress, and after lots of digging, found a pink gown from Vera Wang.

A little over a month after they'd met, Chris took Karelle to Edulis, a restaurant she describes as “the most romantic space in Toronto.” The pair hit it off, and their long-distance romance began. 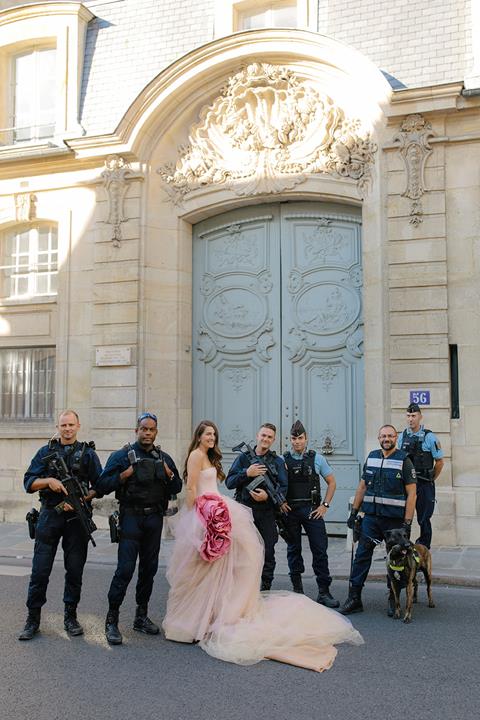 Above: Karelle strikes a pre-ceremony pose with the Gendarmerie.

Fast forward to six months later, Karelle and Chris had become serious and knew their natural next step was for Karelle to move from Toronto to the Bay Area. Soon after moving in, they quickly realized they were meant to be together (Karelle also began working and currently consults for Serena Williams’ clothing line). In the weeks leading up to his proposal, Chris had been dropping hints every week in the form of visual collages. In June 2017, he then whisked his love away on a surprise trip to Southern Utah. After a horseback ride, the couple arrived back at the hotel where a sunset proposal was, as Karelle describes, "planned and executed to perfection."

The lovebirds began planning their wedding, and decided on Paris, where they secured a private mansion near the Grand Palais for their venue. The dress code? Creative Black Tie.

In order to pull off a wedding across the pond, the couple enlisted the support of Billy Folchetti of Luxe Paris Events.  The venue, which Karelle describes as "over the top, already,” was so spectacular that the bride decided that flowers – not even a bridal bouquet – weren't needed. What she wanted instead were as many candles as possible. In fact there were so many that Karelle half-jokingly recalls worrying her dress would go up in flames walking down the aisle. 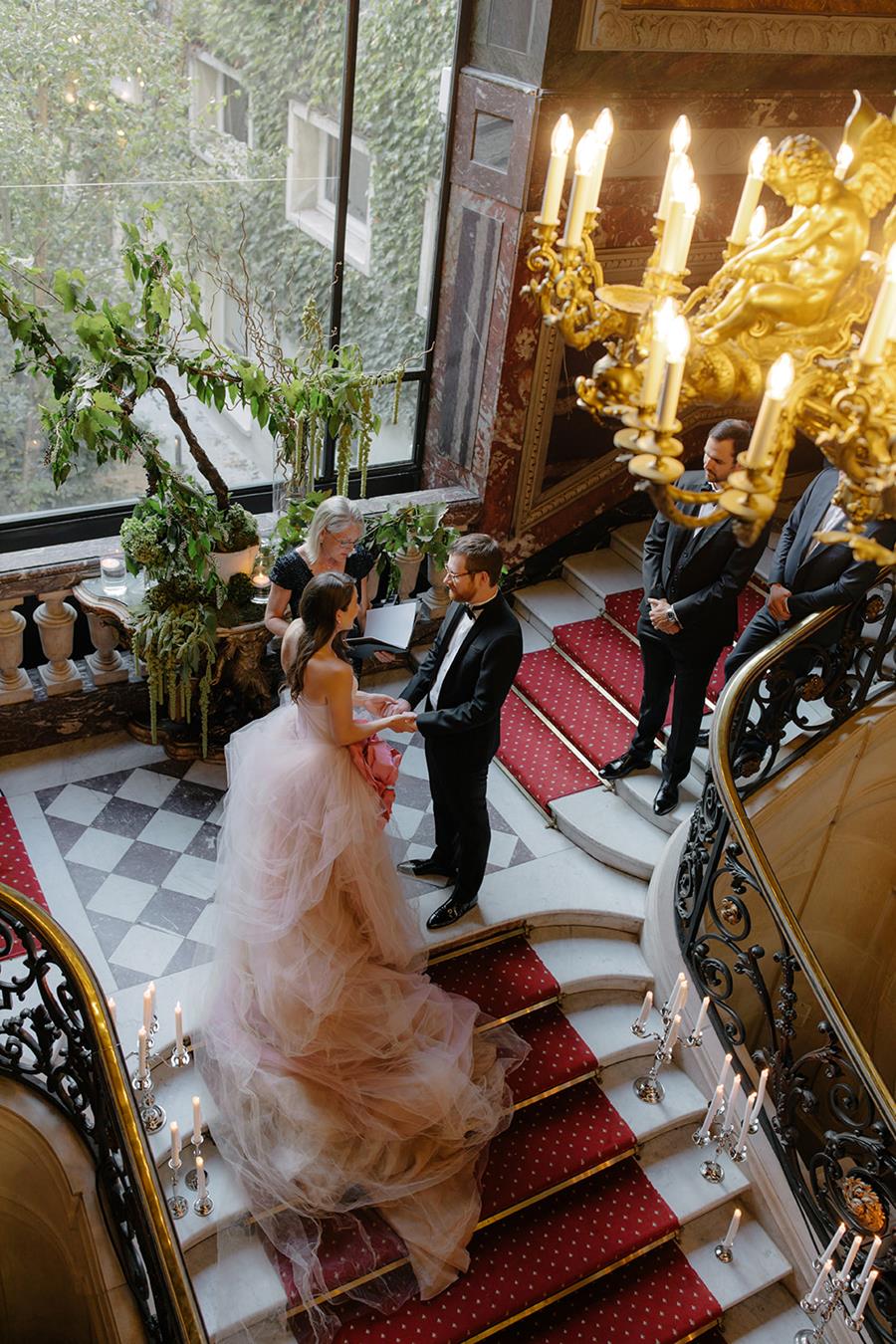 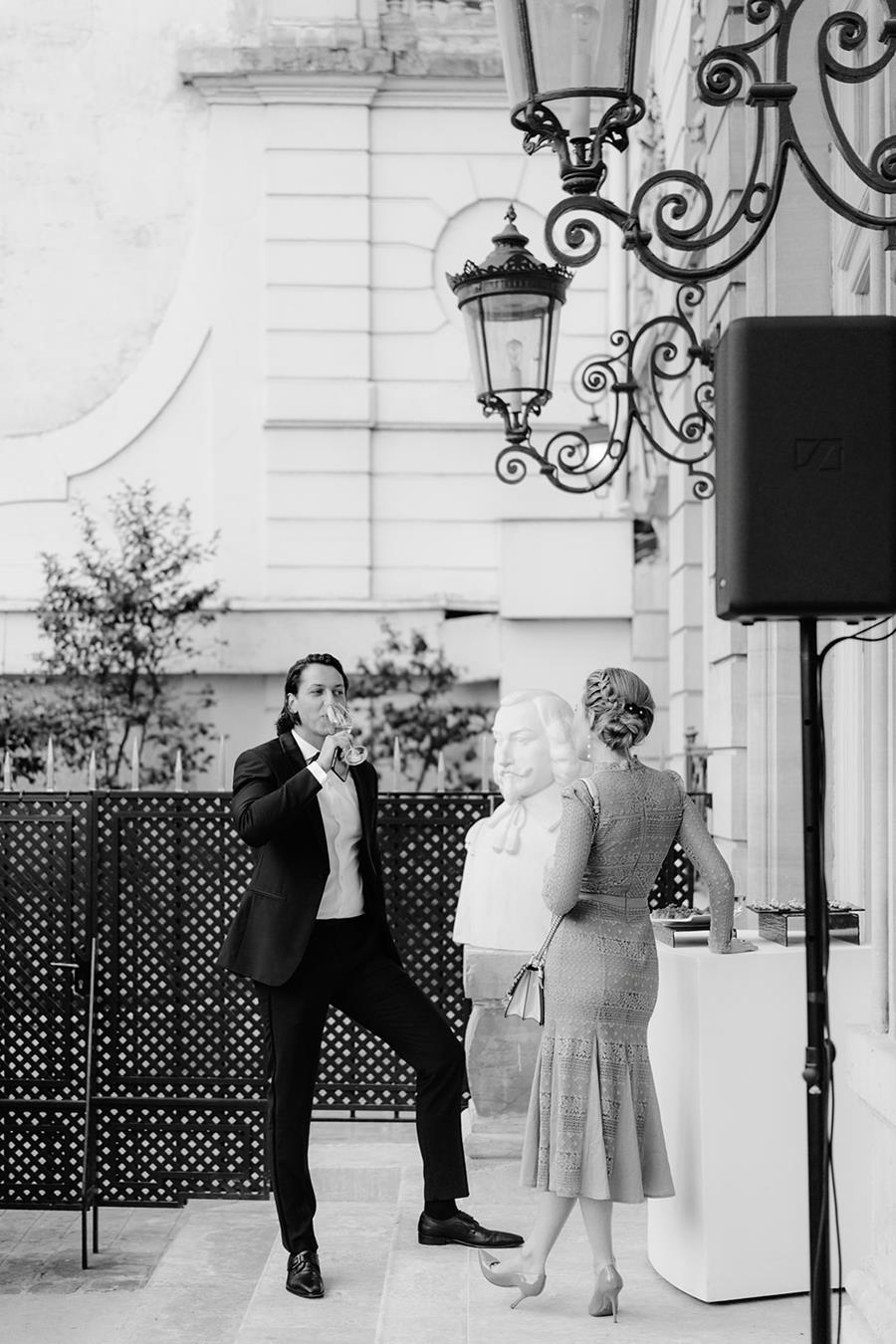 Post ceremony, guests dined on a quintessential Parisian menu of sea bass tartare, duck breast stuffed with foie gras, and a cheese cart at the end of the meal. 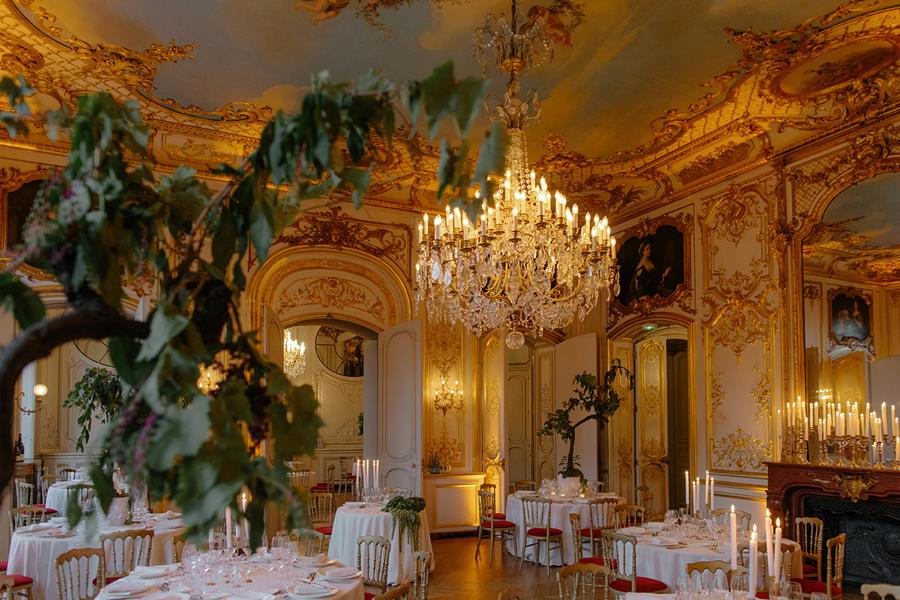 The couple – who are passionate about wine – had a grapevine centrepiece at each table in lieu of flowers. They also placed a huge focus on what their guests drank, selecting producers that were meaningful to them and bringing in the wine six months prior to the wedding, and storing it with a friend. 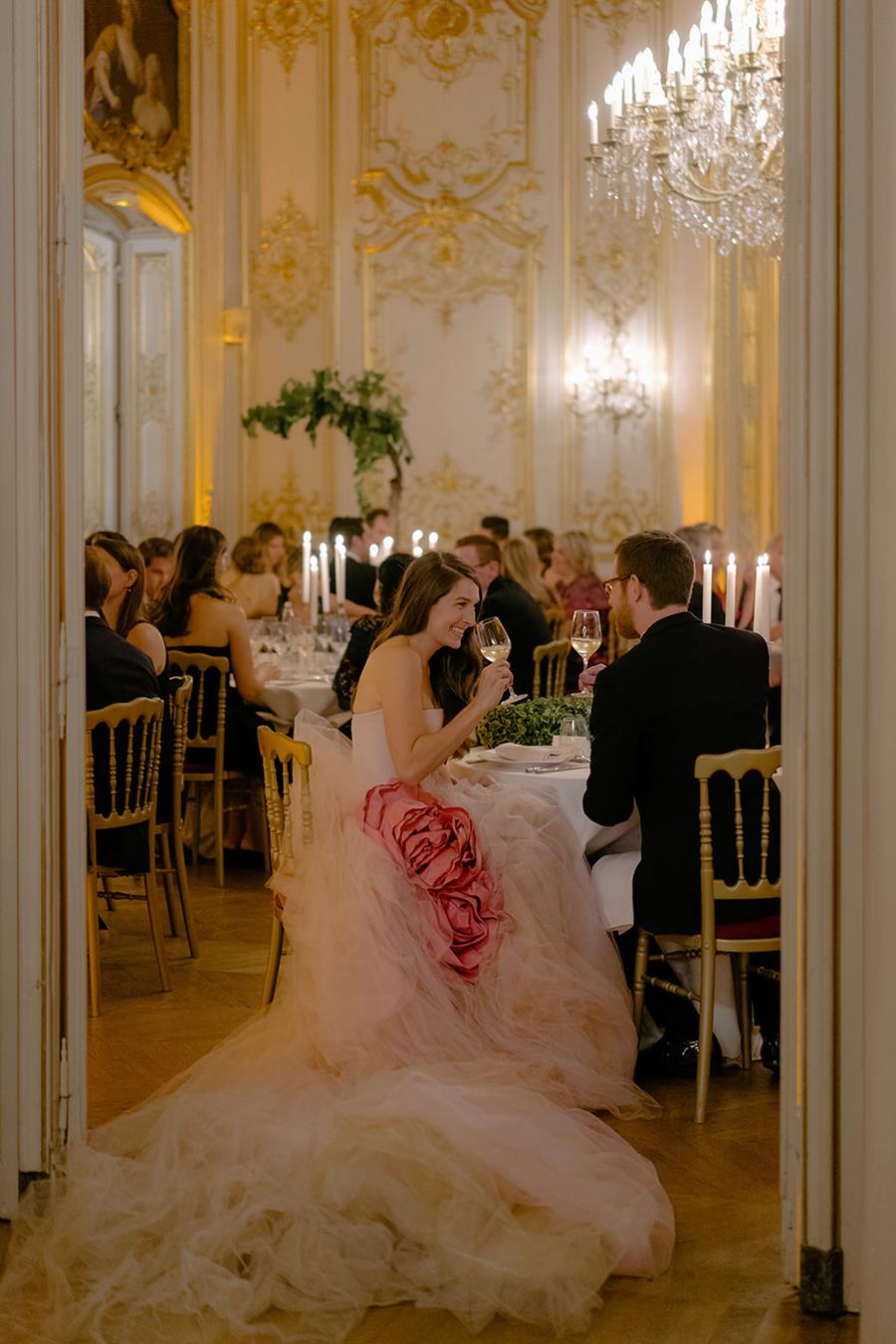 The newlyweds, who had originally planned on no speeches, both admit that after relenting, were among the day’s most memorable moments. Adds Karelle, “I think even our wedding planner shed a couple of tears.”

Above: The wedding cake was a classic croquembouche – a traditional French wedding cake and also what Karelle’s parents served 35 years ago when they were married at Toronto’s Rosedale Golf Club. Post-dinner, guests interspersed the many candles with disco balls and danced well into the night.

Their favourite gifts include their Rina Menardi dinnerware, Georg Jensen's Grand Champagne Cooler (“perfect for entertaining,” explains Karelle) and spool candlesticks, which she describes as “beautiful centrepieces in their own right.”

The newly betrothed spent a few days in Paris before flying to Bali and Japan for their honeymoon. Now back home in San Francisco, Chris and Karelle entertain regularly, an activity that helps Karelle meet new people, and something that fuels her creative side, whether it's adding large, impactful branches to their vases, or thinking up unique centrepieces.